Prospect Park, the resplendent landscaped oasis in the heart of Brooklyn, makes a fine destination for a long walk, especially during the fall season. Frederick Law Olmsted and Calvert Vaux designed the park on top of a deep glacier, echoing similar features of their Central Park. Here we have The Long Meadow to the north and west, the southern Lake, and the thickly-wooded Ravine, the latter as deliberately confusing as Central Park's Ramble. Prospect Park provides plentiful opportunities to disconnect from civilization, at least for a little bit, and become blissfully lost. 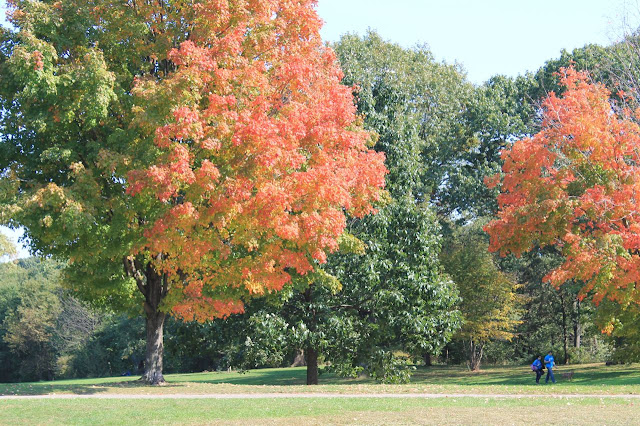 Prospect Park opened officially to the public on October 19, 1867. The park is home to 30,000 trees, many of them over two hundred years old. Contemporary visitors to the park would see the same trees as those who initially wandered through here during the days of its autumn opening, just two years after the end of the Civil War. 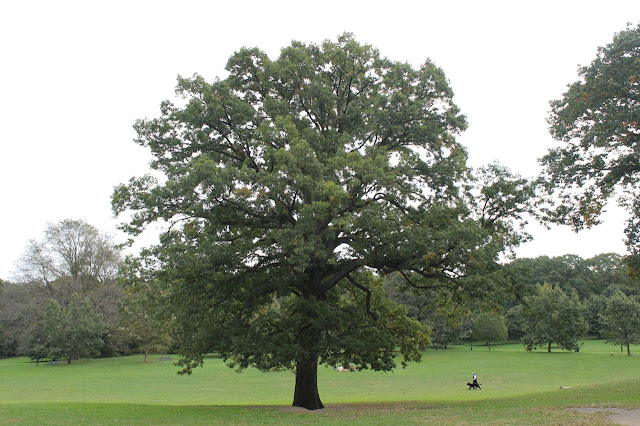 A good place to begin and end a walk would be the Audubon Center at the Boathouse near the eastern edge of the park. It's also within quick walking distance of the Prospect Park subway stop. The center offers visitor information, and it functions as the trailhead for several interlinked nature trails. Most areas of the park feature directional signs to major sites, including the Audubon Center, but once deep into the Ravine, the way is not always clear. 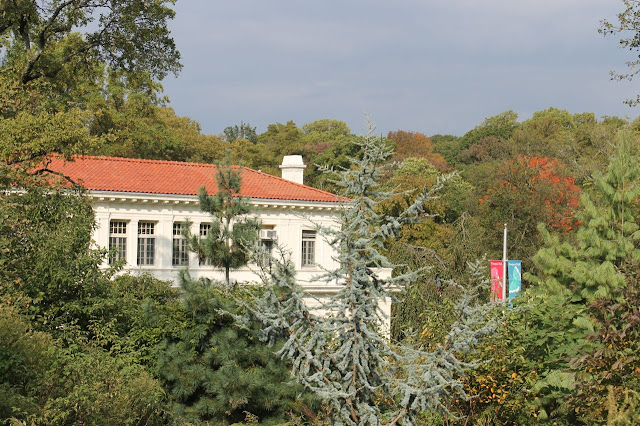 Let's talk about the Green Slime. An abundance of algae and other plants have disconcertingly thickened the park's waters. The brackish substance is not the result of fertilizer runoff, ordinarily a typical cause, but rather due to the potassium-rich New York tap water that fills the park's artificial lakes and streams. Park officials have been trying to combat the pond scum by using boats made to skim the sludge. Letting it grow would kill off plants and animals. In terms of enjoying sublime scenes of nature, albeit artificial, it's a royal green mess.* 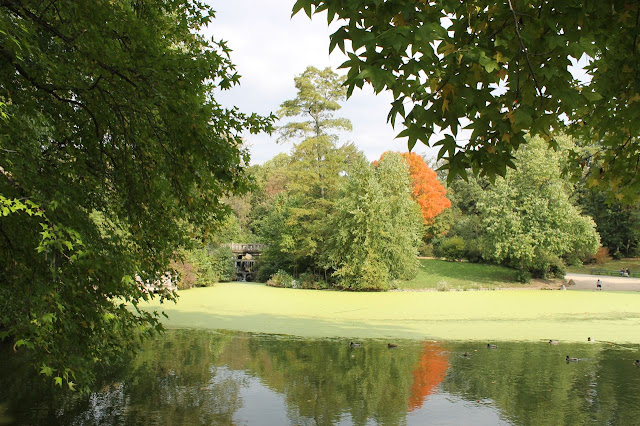 Beyond the slime, there is much beauty in Prospect Park - thick woods with waterfalls, sweeping scenes of undulating meadow, rustic and muddy bridal paths, majestic oaks, and quickly-scurrying chipmunks. 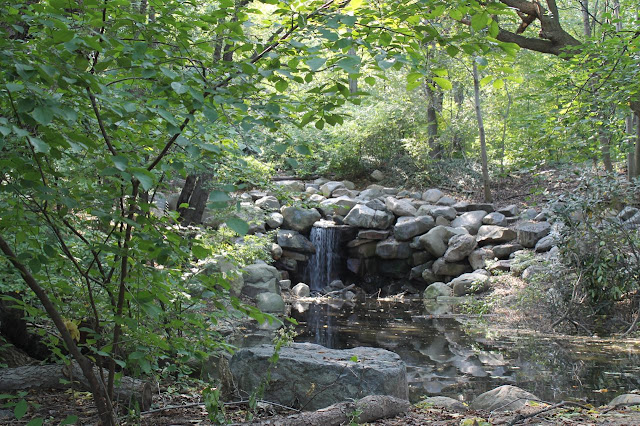 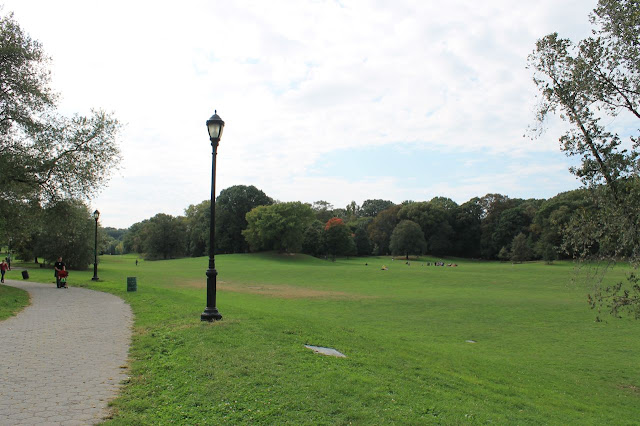 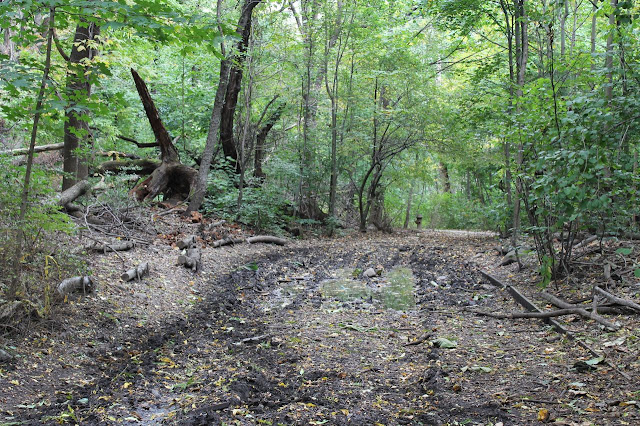 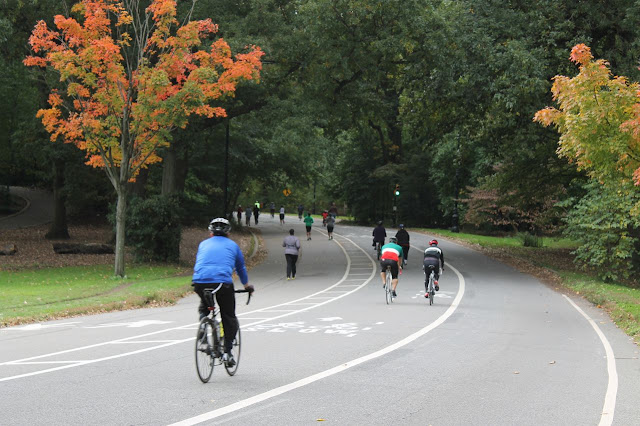 I have a few tried-and-true walking mantras when I'm walking off the Big Apple:

• The harder the week, the longer the walk. 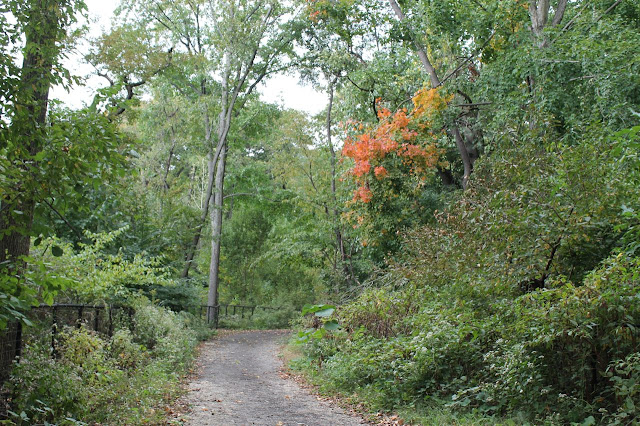 • When you feel lost, you must go to a place, like the Ravine, where you can and must get lost. Once there, you need to find your way back. 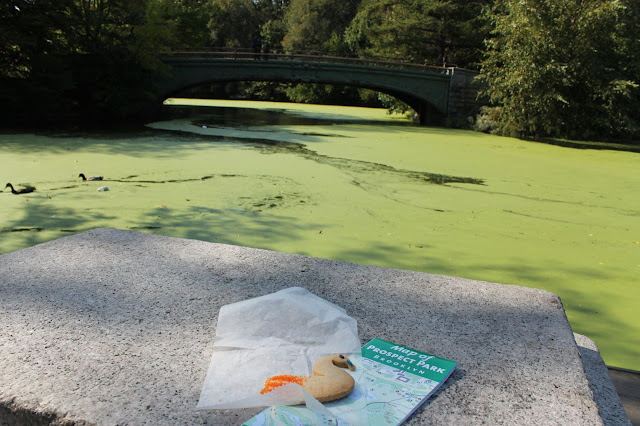 Images by Walking Off the Big Apple from October 14, 2012 in Prospect Park, Brooklyn. Clicking on the pictures enlarges them. View additional photos in this slideshow on Flickr WOTBA.