Stretching along the Hudson River from 72nd Street to 158th Street, Riverside Park, one of the city's most established parks, was designed by Frederick Law Olmsted in 1875, just ten years after the Civil War. The park serves as the site for 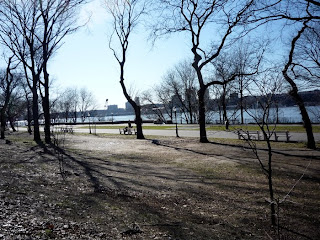 two important monuments commemorating events of the war, Grant's Tomb and the Soldiers and Sailors Monument, as well as statues of women we associate with different times - France's spiritual soldier, Joan of Arc, and America's fighter for the underprivileged, Eleanor Roosevelt.

Along the way, the ample park space along Riverside Drive makes driving into the city from the north less abrupt than expected, but walking is the best way to appreciate the various levels and movements within the park. Since 1875 Riverside Park has undergone several periods of renovations and improvements, with many taking place in the last twenty years. Local residents have largely contributed to the designs of the current park, and based on their presence in the park, it looks like their dogs have contributed opinions as well.
To explore the section of Riverside Park from 96th Street to the southernmost end of the park at 72nd Street, take the subway to the 96th Street stop, walk down the length of the park to 72nd and then back over to the subway stop on Broadway. 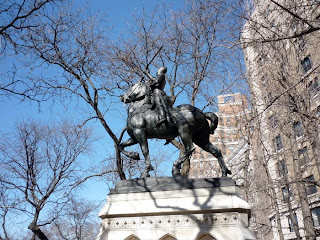 Among the many artists who have suffered for their art, grown hungry while they crouched in small cold flats, Anna Hyatt Huntington (1876-1973) was not one of them. Growing up as the daughter of a Harvard zoology professor, she developed an interest in animal studies. Especially proficient in rendering images of horses, Huntington specialized in animal sculptures throughout her career. When she moved to New York at the age of 24, she was one of the few sculptors who specialized in the genre. The competition kept her focused on her work.

The part about not suffering arrived with her marriage on March 10, 1923 (she was in her late forties) to Archer Milton Huntington (1870-1955), a poet and scholar in Hispanic Studies and the stepson of railroad magnate Collis Potter Huntington. By the time of their marriage they had both made substantial contributions to their respective fields. Archer founded the Hispanic Society of America in 1904, donating the land that would become Audubon Terrace. Devoting his energies to philanthropy, he was also a founder of the American Academy of Arts and Letters and the Museum of the American Indian, among other institutions.

Before her marriage to Huntington, her first marriage and his second one, Anna Vaughn Hyatt created the equestrian Joan of Arc statue in 1915, a continuation of her interest in the saint from her days studying art in Paris. For the New York statue, she won a design competition sponsored by fans of Joan to commemorate the 500th anniversary of the saint's birth. According to D. E. Cook's biography, Woman Sculptor: Anna Hyatt Huntington (1876-1973)

, the statue was the first equestrian statue in New York by a woman. Three other copies exist elsewhere, one in France. After Anna and Archer married, she created the sculpture of El Cid that graces the courtyard of Audubon Terrace. In 1929, the couple purchased four plantations on the coast of South Carolina as a place to exhibit her work. Brookgreen Gardens opened to the public in 1932 and has in time developed a significant collection of figurative sculpture. 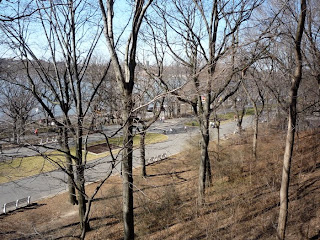 Archives of American Art, the sculptor revealed many things about her artistic training and process, her decade-long bout with tuberculosis, the many travels with her husband, the frequent trips to New York zoos for animal studies, a lack of enthusiasm for modernism, her admiration for Generalissimo Francisco Franco, and her support for Barry Goldwater's presidential bid. (Oh, my!) She also expounds on the process for creating her Joan of Arc, a multi-year project that involved studying delivery horses in Paris, researching in the Met in New York for an accurate suit of armor, making the plaster cast and hiring a person to render the sculpture in clay, and the gala dedication ceremony. Read more of this fascinating interview here.

To see the Joan of Arc statue, stay near Riverside Drive at W. 93rd St. before descending into the park. Continue the walk southward, exploring the many levels and views of the serpentine park. According to the NYC Parks web page on the history of Riverside Park, "From the Drive, the landscape terraces down steeply in three levels to a manmade shoreline and promenade, constructed between 1937 and 1941 under the administration of Robert Moses." In the 1980s, renewed efforts to coordinate renovation of the park led to the creation of a new master plan as well as the beginning of a grassroots organization, The Riverside Park Fund, to preserve and improve New York's classic waterfront green space." (from web page of the Riverside Park Fund).

• The statue of Eleanor Roosevelt by Penelope Jencks, near the 72nd Street entrance to the park 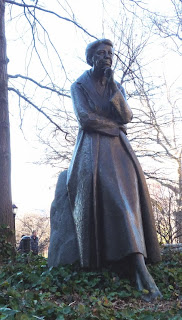 at Riverside Drive, marks the end of this self-guided walk. The work from 1996 portrays an oversize Roosevelt deep in thought, leaning against a rock and gazing toward the east. In an essay on the sculpture for the American Historical Association's annual meeting in 2009, historian Ellen Ross writes, "Eleanor Roosevelt is a natural subject for public tribute in New York, as she was born in New York City, resided here for years, was the wife of a state governor, and a city reform politician in her own right. Yet this sculpture was not completed until 1996, thirty-four years after her death."

A fundraising committee chaired by Franklin D. Roosevelt and art dealer Herbert Zohn began the project to commemorate the former First Lady in the 1980s, and additional funding came from the city and state. Jencks, who often works in a more stylized modernist vein but who eventually chose to represent her subject in a kind of heightened realism, studied Roosevelt's image for over two years in order to get it right. Hillary Clinton spoke at the dedication ceremony in 1996.

In front of the sculpture on the sidewalk, a stone is engraved with the quote: "Where, after all, do universal human rights begin? In small places, close to home. Such are the places where every man, woman and child seeks equal justice." - Eleanor Roosevelt, 1958

Of all the hundreds of prominent public sculptures in New York, only five depict women - these two of Joan of Arc and Eleanor Roosevelt in Riverside Park, Gertrude Stein (Bryant Park), Golda Meir ( 39th and Broadway), and Harriet Tubman (Frederick Douglass Boulevard and W. 122nd St.)

There you have it - Joan of Arc and Barry Goldwater to Eleanor Roosevelt and Hillary Clinton, all in a walk in the park.