A Roundabout Walk in Columbus Circle 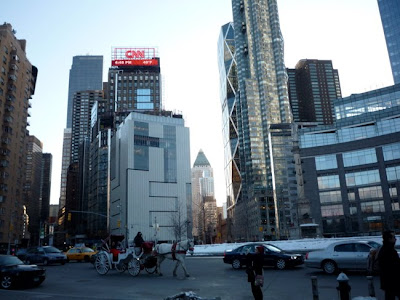 On the southwest corner of Central Park, Columbus Circle spins travelers in centrifugal force out toward Broadway, Central Park West, 59th Street (Central Park South), and Eighth Avenue. The circular design, unusual in New York, is the work of William Phelps Eno (1858-1945), one of the true unsung creative minds of the modern world. Known as "the Father of Traffic Safety," the New York native in 1903 developed the world's first traffic code to deal with the nightmares of city congestion. According to his book, Street Traffic Regulation (published by The Rider and Driver Publishing Co., 1909), horse and carriage traffic in New York was completely chaotic in the late 19th century. He writes, "Conditions were execrable so far as time, economy, 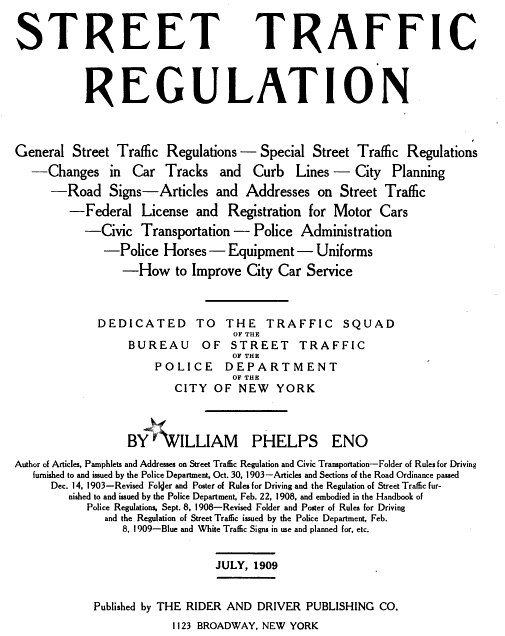 comfort and safety were concerned, and the police, without systematic direction, were powerless and in fact practically at the mercy of the mob."

Eno's subsequent advocacy for street safety led him to develop many innovations we now take for granted - the stop sign, speed limits, and one-way streets. His solutions for the horse-drawn age carried through to the age of the automobile. Eno is also the father of the rotary traffic circle, his solution for controlling the confusion presented by an intersection with multiple streets. In addition to designing Columbus Circle, Eno is the man responsible for devising the rotary traffic around the Arc de Triomphe at Place de l'Étoile in Paris. There, twelve avenues meet, and automobile traffic is often beyond a nightmare.

The pictures below, as shown in Eno's book, illustrate some of the the typical traffic problems in New York at the beginning of the 20th century. 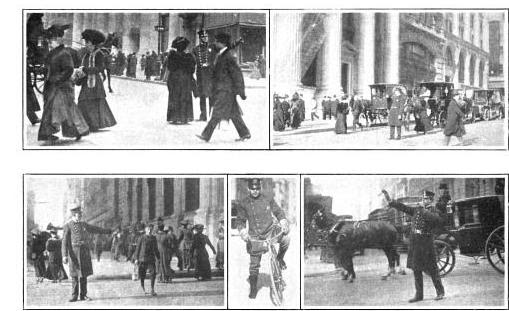 One hundred years later, in 2005, the plaza at Columbus Circle in New York was renovated and greatly improved. The central plaza now features trees, seating spaces, seasonal plantings, and fountains. For pedestrians, Columbus Circle is much safer than in previous years.


View A Walk Around Columbus Circle in a larger map

• The Monuments: The monument of Christopher Columbus is at the center of Columbus Circle. 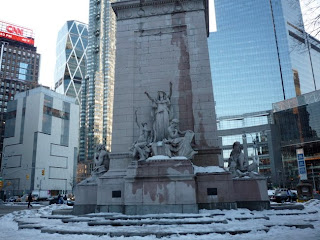 Created by Italian sculptor Gaetano Russo, the marble statue of the explorer was dedicated in 1892 to commemorate the 400th anniversary of the voyage to the New World. Merchant's Gate at the southwest corner of Central Park is one of the park's main entrances. The imposing Maine Monument from 1913 (right) was erected in honor of the sailors who were killed in the explosion and sinking of the battleship Maine in 1898. The incident triggered the Spanish-American War.

• Time Warner Center, 2003-2004, designed by David Childs of Skidmore, Owings & Merrill: An enormous complex with fashion and beauty stores, a large Williams-Sonoma store, shoe stores, gourmet markets and cafes and exceptional restaurants. The latter includes Landmarc, Per Se, and Porter House. CNN's New York bureau is here as well as the upscale Mandarin Oriental Hotel and Jazz at Lincoln Center. For a more thrilling walk, look for the places to see Columbus Circle from on high. Ride the escalators to the fourth floor of the Time Warner 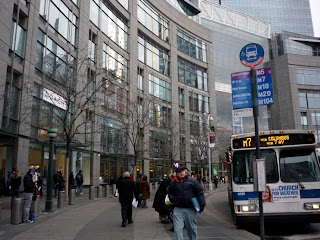 Center and look out on W. 59th Street, or visit the 35th story Lobby Bar at the Mandarin Oriental Hotel for a dramatic view with cocktails. From the point of view of the visitor to the Time Warner Center, the glass cable-net wall on the east side not only provides wonderful views of Columbus Circle, the six-story wall seemingly extends W. 59th directly into the building. Back in William Eno's day, the ornate Majestic Theatre was built on this spot in 1903. In his book, Eno analyzes the traffic issues presented by people gathering all at once at the theater, a problem that has never found a great solution.
Another novel form of traffic invention can be experienced in the customer checkout lanes at Whole Foods, the grocery store on the basement level of the Time Warner Center. A busy market popular with New Yorkers, the store features a nerve-wracking system to check out customers. While a robotic voice calls out the number of the next available register, a human person stands at the beginning of the lanes to insure that the customer heads in the right direction. It feels like a game show.

• Trump International Hotel and Tower. Built and renovated in 1997 over the skeleton of the 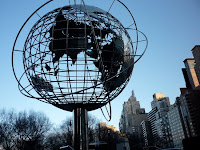 previous Gulf and Western Building, the 52-story hotel and residential tower is also home to the restaurants Jean-Georges and Nougatine. The globe that looms over the subway entrance has become a familiar landmark.

• 240 Central Park South: This 28-story building designed by Mayer & Whittlesley was erected in 1941. As quoted in The City Review's The Midtown Book, architecture historians Robert A. M. Stern, Thomas Mellins and David Fishman credit the building as "the first Manhattan apartment house to make extensive use of balconies." A specimen of late Art Deco, the building features cool street-level storefronts. 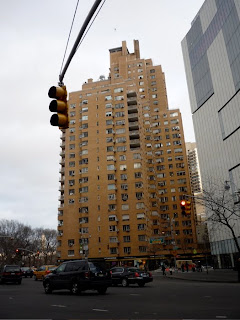 shouldn't discourage visitors from enjoying an excellent museum devoted to innovations in craft and design. Its new stylish restaurant named Robert (after the event designer Robert Isabell who passed away last year ) on the ninth floor provides great views of Central Park.

Columbus Circle makes a fun place to walk. It's also easy to escape the heavy corporate presence of Time Warner and Trump by fleeing on foot into Central Park. Or walk two blocks south and step into the lobby of the Hearst Tower at W. 57th and 8th Avenue. You can't ascend the escalator without being there on official business, but it's still possible to enjoy the minimalist beauty of "Ice Falls," a three-story public sculpture and water feature by James Carpenter Design Associates (also the designers of the Time Warner wall), from the mortal ground below. Also see nearby - the makeover of the old Newsweek Building, now rebranded as 3 Columbus Circle, on the east side of 8th Avenue between 57th and 58th, and the light green 56-story residential tower at 301 West 57th, Central Park Place, built in 1988. Overall, much of the building in this area of Manhattan is relatively new.

For those looking to walk in a straight line after strolling in a circle, one good option is to explore W. 57th Street by walking west to east from 8th Avenue to 5th Avenue. See A Cultural Guide to W. 57th Street: A Walk and a Map on this website.

If I could add anything to improve Columbus 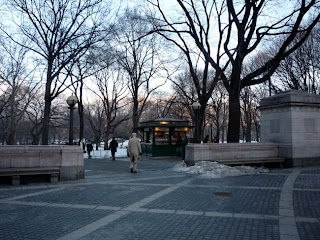 Circle, I would commission a statue of William Eno. As noted on the website of the Eno Transportation Foundation, the organization he founded in 1921, Eno did not care for cars. He preferred to ride horses, and he never learned to drive.
_______

Note on the embedded map: Switching from the current view into Street View pulls up a pretty springtime day in Columbus Circle.

Black and white photo from Street Traffic Regulation by William Phelps Eno (The Rider and Driver Publishing Co., 1909). Color images by Walking Off the Big Apple from February 17, 2010. For additional images see this set on Flickr WOTBA.
at February 21, 2010