A Walk From Lincoln Center to Zabar's 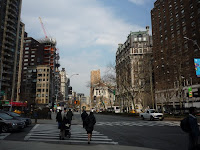 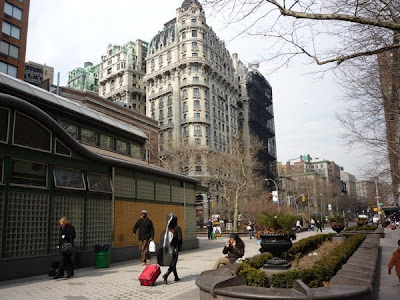 If you happen to be attending a noon or matinee performance in Lincoln Center or otherwise happen to be hanging around there for whatever reason and find you've got some time, I recommend a stroll up Broadway to Zabar's, the famous Upper West Side food emporium.

This stretch of Broadway takes in the sights of several new housing sky-rises, several theaters, and some flamboyant former apartment hotels of the early 20th century. Flâneurs will love the Belle Epoque ambiance of these overly-ornamented buildings, and the distance from W. 66th or so to W. 80th is not so taxing, especially if you're dressed in shoes for the opera. 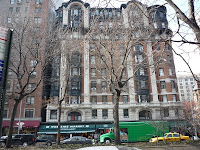 Several noteworthy structures along the way - The Dorilton, 171 W 71st St., from 1900-02, at the northeast corner of Broadway, is considered a Beaux Arts masterpiece. The 72nd St subway station dates from 1904 and is a funny little thing. Verdi Square, at the convergence of Broadway, Amsterdam, an W. 73rd, is a nice small park featuring a statue of Giuseppe Verdi by sculptor Pasquale Civiletti. This would be fun to pass by after the opera, especially for those just getting out of an afternoon performance of Il Trovatore at the Met. 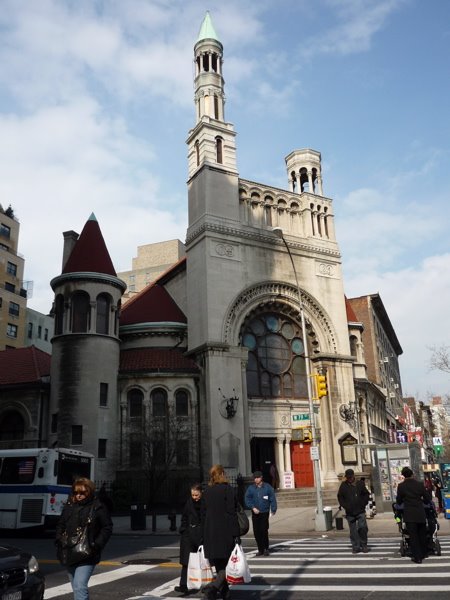 The Ansonia Hotel, 2109 Broadway, is a major Upper West Side landmark. The former apartment hotel was home to many famous actors and sports figures in the early decades of the 20th century, among them actress Billie Burke and American author Theodore Dreiser. The Continental Baths, a landmark in gay history, was located in the basement of the Ansonia in the early 1970s. Fairway Market, 2127 Broadway, is a favorite destination for grocery shopping in the neighborhood.

The Beacon Theatre, 2124 Broadway, another recently restored landmark, is a major venue with upcoming Spring 2009 concerts by Van Morrison, Levon Helm Band, Allman Brothers Band, and Bryan Adams. In addition, H.H. The Dalai Lama will be teaching here all day on on May 4. The Belleclaire Hotel, 250 W 77th St., dating from 1901-1903, is an exquisite Belle Epoque building, with several Art Nouveau features. An eclectic-looking First Baptist Church at 265 W 79th St. looks like a miniature Italian Renaissance castle, meaning it's like nothing you would expect for a Baptist Church.

Zabar's & Co., 2245 Broadway, will soon come up on the left, and you'll want to spend some time shopping the aisles for cheeses, breads, salamis, pickles, chocolates, babkas, rugelachs, prepared dinners and more. They have a cafe, too. Often in New York, we don't care to 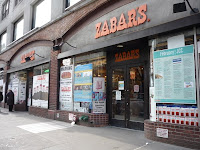 make dinner when someone else has already made it for us. A subway station is nearby for immediate transport home. Zabar's website here.

Images by Walking Off the Big Apple from February 26, 2009.
Pictured here: A look up Broadway, The Ansonia, the Belleclaire Hotel, the First Baptist Church, and Zabar's. On Thursday I picked up dinner and some cheeses at Zabar's to take home and then got on the subway. While on the train, the emergency brake caused the train to stop, so I sat there with my groceries for nearly 45 minutes. It was OK, and I wasn't upset, because I knew I wasn't going to starve.